Please leave a comment! Go to "comentar", then select "Não tem blog no SAPO", then place your name at "Nome" and the comment at "Comentário", fill in the characters of the figure and click "publicar comentário" (publish comment) It's easy you don't need to have a special account!! :)

Solar used to swim there. Her long hair was getting mingled with the algae of the sea. Her hair was bright, like painted by numbed sun beams, that could not be tamed by the waters of the sea, that gently swung her, as if she were on its lap. Sometimes, she would pursue a shoal, trying to catch some fish, with her quick hands, made of soft thin skin, coloured of white sweet milk with honey; and sometimes, she swam gently together with sluggish whales, without any hurry. She used to swim, and run after something, throwing bubbles in the air, playing with star-fishes on the white sand at the very bottom of the sea, and used to fill in her lungs of air on the surface. She also loved to hear the music of the waves.

One day, when she was coming to the surface to breath, moving her fin as quick as possible, she felt something hindering her movements, and as she was unable to identify what it was she tried to grab it and threw it as far as possible… it was transparent. Twisted herself, grabbed her hair, shrieked, whirled, injured herself and at last, at the surface, she put her hands on that thing, watching the shore through it with its many trees, right above a white line of sand, that was a part of a giant beach… Panting, threw away that translucent body that the water seemed to catch… She didn't even notice that behind her, only 20 metres away, there was a ship of white sails and of a very small hull. On that ship, the one crew-member saw her on the exact moment that the strange object was falling in the water, after being thrown at least 5 metres away. He called his girlfriend.

— Maria! Come here quick! There is a mermaid over there and she has just thrown a plastic bag full of water! Quick!!

Maria and Solar, both heard him, and Solar before someone could see her again, dove and swam away from the boat. She looked at a far, and astonished and confused, as if she had never before seen men. That one seemed ok but strange… and was walking above something, with very sharp sticks where there were thin objects hanged, with very thin and white algae, where the wind was blowing…

— Aren't you imagining things?! Mermaids don't exist and you are very tired. Let's go! — Maria had nothing to do, she wasn't even interested on the plastic bag and besides that the wind was blowing on their direction, they could use the opportunity to return home. Nevertheless, that vision of Samuel wasn't good to her because she was very jealous and did not know how to swim, but that woman knew.

Meanwhile, as Maria was trying to convince Samuel to return, Solar approached them. She was then very close and listening what they were saying.

— But Maria, believe in me! I saw her playing with a plastic bag… one of those you usually throw away!

— What ?! Are you saying that the fault is mine? No! Lets go away right now! You know that I can't swim and I'm getting nervous with your visions! — She didn't understand but she was already screaming.

— Hinnnn!!!!! — Solar was disturbed with all that shouting and decided to try to speak with them, but that sharp shriek was not understandable. They stood still looking at her and then she dove slowly, so slowly that it was possible to see her tail vanishing in the waters, scale after scale, reflecting various tones of green and blue, and the sun reflected on them, as if it was reflecting the colours in colourful crystals.

— It was like the colour of snake scales. — Maria was horrified and pale as snow. But, Solar returned to the surface with some algae on her hand and smiled, as if she was willing to offer it to them, showing affection.

— I don't believe. What in the world that stupid creature is doing there?!

— Hum, it looks like she is trying to offer us something. — He leaned over and stretched his arm, as someone who was going to grab the algae.

Solar stretched her arms as an offering tribute. He grabbed the algae and touched her fingers, still feeling the amazement and wonder of being in the presence of a mermaid…

— I'm going to bring something to her... Wait here. — Maria went to revolve the fridge, took a piece of bread with honey and added pepper to it. Returned, fearing for herself, but, outstretched her hand, offering that dangerous gift, without Samuel taking notice of it, although he was astonished by such sympathy towards that strange "person", that had just appeared where company was least expected… But, the gentle wind, seemed to lift Maria’s hair, on Solar's direction.

— Isn't she pretty? — Asked Maria, as if questioning what she already knew it was true.

— Hiiiiii! — As Solar ate the bread, started to shriek in agony and could not stop. She got frightened, and swam away in a hurry running far from the boat, as if she were an imprisoned fish in a sandbank of a shallow river.

— I can not believe it! You poisoned her! — Shouted Samuel.

— Yes, I should have done that, but I've just put pepper on it.

— But you could have poisoned her! Maybe pepper can kill her, we don't know!

— You seem to be more worried with her, a stranger that came from where we don't know, than with me. I'm very disappointed with you. — Answered Maria with an angry face and he stood looking at her. She was right, after all he didn't love her any more, but it was to try to improve their relationship that they were there. But, everything had been in vain. If that stranger had done such a damage then everything was ruined between them.

— Say something! You don’t have anything to say anymore! — Insisted Maria.

Samuel took a seat at the prow, controlling the sail with a rope. He was still shaken by what he saw and felt. He knew that unless he returned there alone, he could not return, because no one would accompany him. One day, he knew, he would return. Maybe it would not take much time…

Solar just wouldn’t leave that place, she was looking for her friends of the food that tickled on her throat. Sometimes, at the beginning of the afternoon, she would take a seat on a rock at the seashore, looking to the horizon, on the sea. The dolphins were jumping, next to the cape, at the extreme end of the beach, and far away, above them, it was possible to see a strange object, just like the one where that man was standing, just a few days ago. The only difference was that this object was in the sky… Maybe they would come in a cloud… and just landed in the waters. Maybe it was only needed to wait a few days, until they decide to descend again… The wind was comforting her: gentle and slightly more than mild. 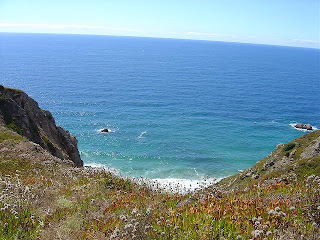 Not very far away from Lisbon is Cape of the Roca, the most occidental peace of land of the European continent. A beautiful place to visit in the Summer...