Quando a solidão me dá a volta

The trip to return home seemed more quick than usual, I was already dizzy with that experience… not even the fresh wind, more mild than it could be expected, made me forget everything. The starry sky was also unable to distract me. But, when I arrived home and saw my little Strawberry playing with the sculpture of Nativity, trying to fix the donkey, already without head, I was happy. She asked me for forgiveness:
— Forgive me uncle! — and that clearly made me forget everything. That small girl was incredible!

After tucking in Leonor I also went to my bed. It was essential to sleep. I had to rest well enough to prepare myself for the trip and to be able to support Madalena on everything that could be necessary. It was thinking about how I would find her that I fell asleep.
I woke up early in the morning. My sister and my mother were astonished when they saw me prepared so soon. I just took the essential time to arrange my luggage, said goodbye to everyone and went to catch Raquel, who was already waiting for me. After saying goodbye to her parents we left.

The trip was pleasant and we saw the Christmas lights in many villages and tried to talk about many subjects. Our anxiety did not completely vanish and we did not let the fear overcome us.

We arrived just in time to have lunch. Madalena's colleagues had already prepared our meal and welcomed us. Although Madalena was very pale and still in the bed, she smiled at us and just said:
— Finally you arrived!
I almost couldn't hold my tears when I saw her. But I controlled myself, and without thinking we repeated that kiss we had at the river. It was a special moment, as if the world did not exist and sickness was not threatening our happiness.
— Please, do not forget me!
Said Raquel, moved by the reunion with her sister. During the afternoon we gave her presents… those we usually give to sick people to cheer them up. The dinner was very funny and the table was covered with cakes. A friend of Madalena also gave her a surprise present: a box with a yellow rose inside it. I was astonished with that surprise: it was a rose just like that I saw at Mont'Alto. But I felt lost, when during the conversation, I knew that Madalena's mother had called her early in the morning, and among several news, one was the enormous light people had seen on the night before at Mont'Alto, and the car crash resulting from that.

After all I wasn't the only person to have seen the phenomena, it was real... Then, I become completely chilled and squeezed her hand with all my strength: her heat calmed down my fear, but I remained silent.
All three of us returned on the 19th of December. Unfortunately, Madalena didn't fight the sickness and died one day later. I was confused and without reaction, I was fearing the collapse of my being, but I decided to resist. Little Strawberry used to ask:
— Uncle, where did Madalena go?
And I used to answer with confidence on my face:
— She went to heaven. To Jesus.

The following days were with family and we spent much time at Madalena's home. Thanks God, it was possible to have holidays in advance, because I wasn’t in conditions to work. I felt that everything was finished before time: both Christmas and my relationship with Madalena. I was confused with the cruelty of life and all of us became anxious wishing the days to pass quickly. Sometimes, in these circumstances, we find support in the most unexpected people. My surprise came from the reaction of Raquel, her mother and their colleagues of school. I could not imagine that all those persons had the clear understanding of how important Madalena was to me.

Christmas Eve arrived as an obstacle to avoid, we couldn't ignore that, and neither made any cakes nor gave presents to each other at Madalena's home. We went to bed as soon as possible. It was a night very different from other years, without any joy.
The Christmas Day was also very sad. Only the sun, with his heat beams, seemed to help us avoid this pain. I couldn't support much more, I had to do something that could help me to put behind the irrational guilt I was feeling, because I was not able to save Madalena.
During the afternoon, after breathing some fresh air while I was going for a walk on my neighbourhood I decided to return to Mont'Alto, that night. As I didn't want to go alone I invited Raquel. My objective was to verify if I could see something at the enchanted fountain. What I had seen was a premonitory vision of the future. After all, places like that always fascinated me and it was possible that if I found calm again I would feel better.
About 10 p.m., there I was waiting for Raquel. She appeared 15 minutes after because she had been talking with her parents. Little time after, and indifferent to the cold wind, I continued to gain speed while driving the motorbike, through mountains and valleys, while Raquel was holding on close to me, from the fear of falling. Nevertheless, her head near on back was as if seeking something more than comfort and shelter. It was then that I remembered our talk when we went shopping. I lost some speed and continued more slowly to the top of the mountain.
When we arrived I felt strangely... comforted. I was not alone and returning to that place where I was the night before the death of Madalena, made me feel the hope I was feeling then. But I had to admit: it had all been in vain. I looked around and I held Raquels hand firmly, like an anchor.
— Come, lets sit near that fountain. — I said calmly.
— Do you know this is an enchanted fountain? — I asked, explaining her that I had had a vision that was seen at a far, as a big light.
— No. I didn't! How funny!
Then I told what had happened to me, she got scared and held on to me. It was then that I cried, for the first time since Madalena's death.
— That’s okay just let it out... Cry... Its good for you... — Raquel said, as someone comforting a child.
— We should stay together forever... that’s what I wanted… — She begged.
— Of course we will. And Madalena will always be in our hearts. — I told her, as someone who tries to conciliate feelings with reality. Our kiss was deep, from whom also wants to seal a compromise.


It was then that a cold wind rose up, the same that I had felt when I saw the light phenomena. We were still holding each other when… Suddenly, a soft light embraced us and also the fountain and small shining pieces of something unknown started to fall from heaven. A woman appeared in the veranda, above the fountain, dressed like a medieval Princess… and said to us:
— Only you can see this Christmas light. Do not be afraid… Madalena is well. Be happy.
And after saying this she looked at us a few more moments and vanished. Instead of feeling fear we got warm with joy, full of happiness.
That night was a landmark for us forever. We asked many people if they had seen some light at the mountain, but nobody saw anything. Only we had seen it… and we kept inside of a small box, our secret, in the shape of small shiny pieces that we caught on that night, but, on the next day, when we returned there, there was nothing!
And just as a fairy tale, we were happy forever. And from our love two small strawberries were born and when we heard Christmas songs, more than ever, we felt that Madalena was living in our hearts.

I which a Merry Christmas to everyone, together with family and friends! :-) 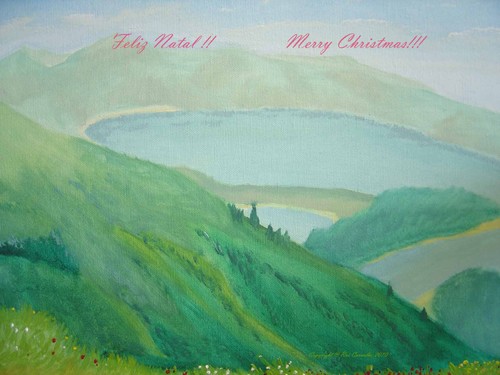 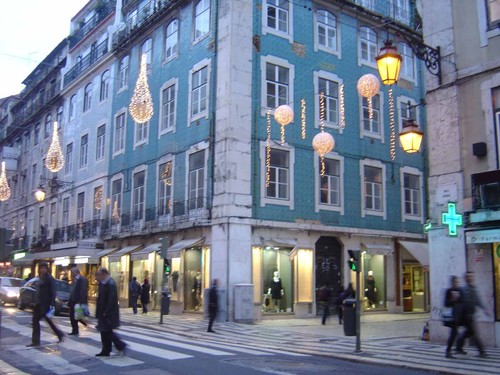 and CPI Book Delivery (romances - "Tales for The Ones in Love")